On May 13, 2008, a security advisory was issued, warning that Debian 4.0 ("etch") Linux distribution contained a crippled random-number generator. As a result, most cryptographic functionality was severely weakened. Unlike most security vulnerabilities, simply updating the software on affected machines is insufficient to close the security hole -- weak cryptographic keys generated on the affected machines also need to be replaced.

ECE IT Services has taken the following precautions:

Since Debian is widely used in the ECE Department, and this security hole affects even users who normally do not use a Debian 4.0 workstation, please feel free to ask help@ece.ubc.ca if you need guidance on what actions you need to take.

If you use PuTTY as your SSH client, then the warning looks like this: 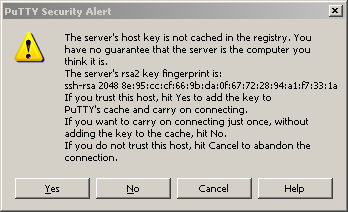 Normally, you should heed the warning as an indication that an attacker may have intercepted your SSH session, but in this case the host key changes are legitimate. Use a text editor to remove the offending line from your known_hosts file.

For your convenience, ECE IT Services has already removed weak SSH host keys from all users' ~/.ssh/known_hosts files in their ECE home directories. As a consequence, you will see this (if using OpenSSH):

Please check that the fingerprint matches the ones given below. Then and only then answer "yes" to continue.

Normally, SSH keys are 1024 or 2048 bits long. An attacker taking the brute-force approach, trying every single possible key, would require 2{^1023} or 2{^2047} attempts on average before finding the right key.

It was recently discovered that Debian 4.0 ("Debian etch") and Debian-derived Linux distributions (such as Ubuntu) shipped with an OpenSSL package that was mistakenly modified in such a way that its random-number generator produced extremely predictable output. The random-number generator only had 16 bits of randomness, and 2{^16} is much much smaller than 2{^1024}. In Linux, most services rely on the OpenSSL library for cryptographic functionality.

The greatest risk to ECE servers is that an attacker could try logging in with all of the known weak keys resulting from the crippled random-number generator and have a high probability of finding one of the 2{^16} keys within minutes, without having to guess account passwords or SSH key passphrases. Therefore, ECE IT Services has disabled known weak keys in ~/.ssh/authorized_keys files.

Another possible risk is that an attacker could set up rogue servers pretending to be ssh-linux.ece.ubc.ca or www.ece.ubc.ca. This is a more difficult attack to execute, but ECE IT Services is taking the precaution of changing weak SSH host keys and SSL certificates.

There are also less likely risks. If an attacker had been evesdropping on network traffic, he or she could decrypt SSH or HTTPS sessions that took place in the past. Also, any DSA SSH keys that have ever been used with vulnerable SSH servers could be compromised due to the way the DSA protocol works.